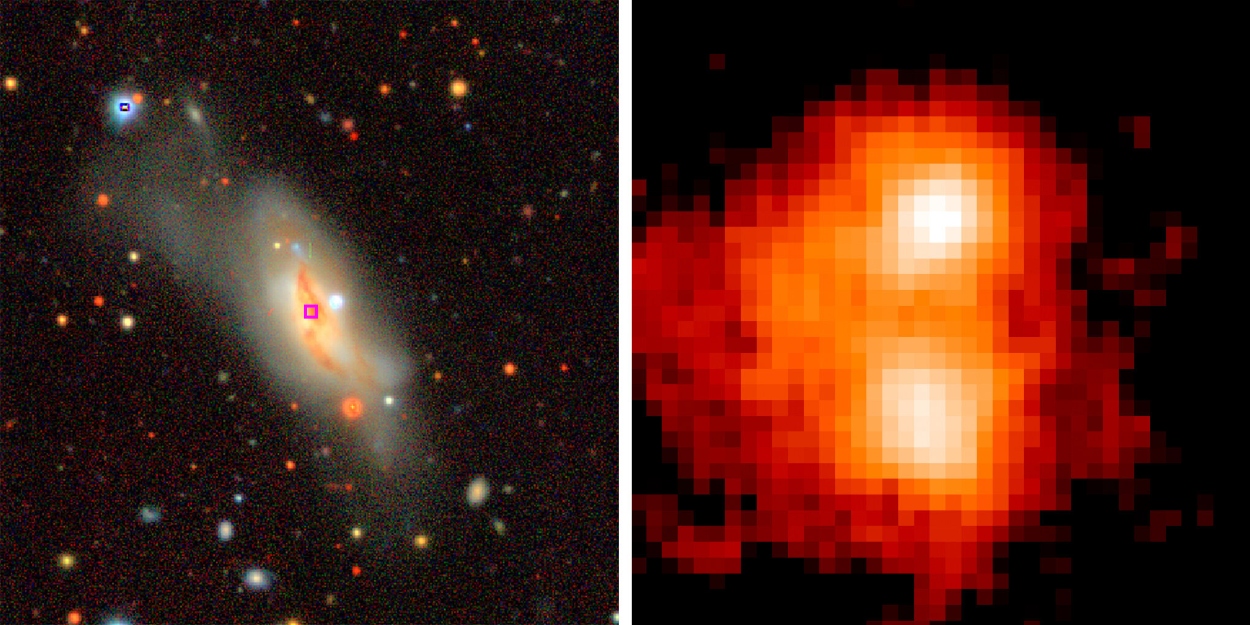 A team of astronomers has just discovered a pair of supermassive black holes which are the closest ever observed to date. are located at 500 million light years from Earth near the center of a ‘newly merged’ galaxy called UGC4211.

Both dark bodies, which are devouring matter and light around them, are located from each other 750 light yearsa distance considered ‘close’ in cosmological terms.

That “close separation” between the two cosmic objects was also the reason why experts were only able to distinguish them as two different bodies after combining several explorations carried out with the ALMA observatory, the Very Large Telescope of the European Southern Observatory and the Hubble and Chandra telescopes. from NASA.

On the left, a mixture of two colliding galaxies. On the right, the magnification of the pink box shows the location of two black holes. Photo: MJ. koss

The product of a galaxy merger

Just as the Milky Way has Sagittarius A* at its heart, astronomers say that most galaxies have a supermassive black hole at their center, which is characterized by having millions or billions of times the mass of the Sun. .

In the case of the two recently discovered dark bodies, they have between 125 and 200 million solar masses, characteristics known for the large amount of hot gas that forms around them.

Eventually, both supermassive black holes will start circling each other and start to produce stronger and stronger gravitational waves (vibrations in space-time). Eventually, they will collide and form one more gigantic and massive body.

Said scenario, however, will only happen hundreds of millions of years from now, the researchers detail in their article published in The Astrophysical Journal Letters.

More common than we imagine

Following the finding, the team of experts, led by astronomer Chiara Mingarrelli, suspects that supermassive black holes together “are probably more common than we think,” since they were found without looking very far.

“There may be many pairs of growing supermassive black holes in the centers of galaxies that we have not been able to identify until now,” also says Ezequiel Treister, an astronomer at the Catholic University of Chile and co-author of the research.

“If this is the case, in the near future we will be observing frequent gravitational wave events caused by the mergers of these objects in the Universe,” he added.

Also, according to the authors, the new research could have a profound impact on our understanding of the impending merger of the Milky Way with Andromeda, its neighboring galaxy.