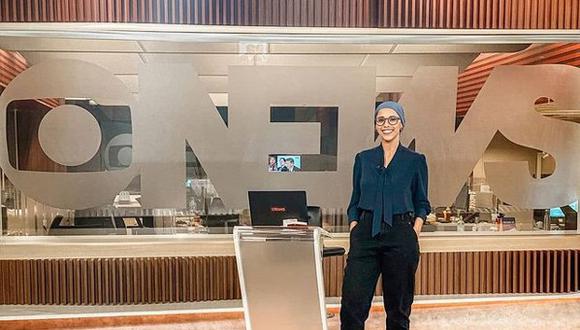 Forces. Lilian ribeiro is a journalist from Brazil who a few days ago was diagnosed with breast cancer, so she used her first minutes on the air to tell because she was wearing a blue headscarf and it is that at 37 he must be stronger than ever.

“You may have noticed, I look a little different and I really want to share the reason for this with you. On October 1, I was diagnosed with breast cancer. It is difficult, it is not easy. But I’m taking care of myself”, Stated on the chain Globo News.

He also said that he has already started chemotherapy treatment. “I am treating myself, taking care of myself. I started chemotherapy and it has been going well, as the doctors say. Few reactions, some a bit boring too, but we keep going. Like most people who undergo chemotherapy, I lost a lot of my hair“, said.

Ribeiro, along with his co-workers, indicated that from now on they will see her on the screens with a turban. “So in this process on the way to a cure, I’ll look like this on the GloboNews screen, with a turban”.

The Brazilian television presenter and communicator stressed that with the use of this press she wanted to send a message. “I wish this scarf was the memory for you, less of the illness that I am facing and much more of the fact that I am taking care of myself, doing the best for myself.. And that includes being here. Even with the guidance of my doctors, who stressed that being here working also helps me ”, he commented with a broken voice.

Meanwhile, she said that the result took her by surprise. However, it is now strengthened. “I have cancer, but this cancer never had me. This is a beautiful way to live how many days we have in this crazy life. We all have pains and we will always have, but may those pains never have us“, he claimed.