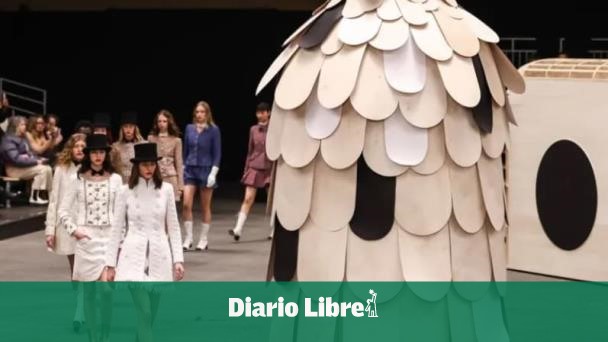 Jackets such as minidresses, sequins and top hats were the silhouette chosen this Tuesday by Chanel in his parade haute couturewhere he was inspired by the animal charms used by Coco Chanel and resumed circus codes.

With a set of mobile sculptures of animals that created a labyrinth on the catwalk, the Parisian “maison” once again had the French artist Xavier Veilhan, who for the third time imagined a unique setting for the presentation of the Couture spring-summer collection 2023.

Camels, lions, birds, horses and even an elephant were the images reproduced in cardboard, wood and paper figures, in a rather architectural style that radically distances itself from naturalism.

In clothing, the pristine white that the creative director, Virginie Viard, chose to build a line of refined cuts, mini-dresses, trapeze-cut skirts, pleated skirts and lace and sequin dresses stood out.

Metallic color becomes the key to “tweed” suits, a classic by the firm, which revisits them in long jackets, mini-dresses, shorts and even long dresses embroidered with sequins.

The elaborate embroideries and gemstone details, typical of the haute couture where each piece takes hours and hours of craftsmanship, contrasted with the sober accessories of the collection.

The brand’s famous “slingbacks”, an slingback shoe with a two-tone toe, are worn as black loafers, flat and with a strap holding the heel.

They also highlighted the flat, white boots with laces up to the middle of the leg, or golden ankle boots with a black toecap.

These were also the boots chosen to combine with the wedding dress presented by the brand, a straight-cut minidress tight at the waist and covered by a veil with sequin-embroidered swallows. Fresh and with a “rock’n’roll” point.

Miniskirts were a constant in the collection, either under short jackets, American-style but fitted at the waist, or with jackets and as a coat.

The evening dresses were also simple, long but flowery, lingerie-style, with thin straps and a round neckline, or completely lace and with gold beading on the front.

Black and white were the most popular colors on the catwalk, with sequins reproducing floral prints, houndstooth and geometric shapes, somewhat impressionistic.

Virginie Viard’s collections, who was designer Karl Lagerfeld’s right-hand man for several decades, are much fresher and simpler than those of the German.

Viard, who succeeded him in the position in 2019, has opted to cut silhouettes, shortening the length of the clothing, but he has also reduced accessories and, in general, everything that is more superficial.

This has also happened by simplifying the spectacular parades of Lagerfeld to Chanelwith its scale reproductions of the city of Paris, a beach, a mountain or even a spaceship.

Although on this occasion the animal sculptures, such as the Trojan Horse, opened suddenly to let the models out of their interior, Viard’s sets opted for minimalism.

“Virginie Viard asked me if I could work around the idea of ​​Gabrielle’s apartment. Chanel and his animal figures. I found it interesting to start from this and evoke our relationship with the animal, which is constantly evolving in our societies,” said the artist Veilhan in a note to attendees.

Waiting for the monumental Grand Palais to reopen its doors in 2024 after an exhaustive restoration, Chanel It has gone on to organize its parades in the ephemeral Grand Palais, a few meters from the Eiffel Tower.

The almighty director of Vogue USA, Anna Wintour, among others, but also the tennis player Roger Federer or the South Korean actress Kim Go-eun attended there.