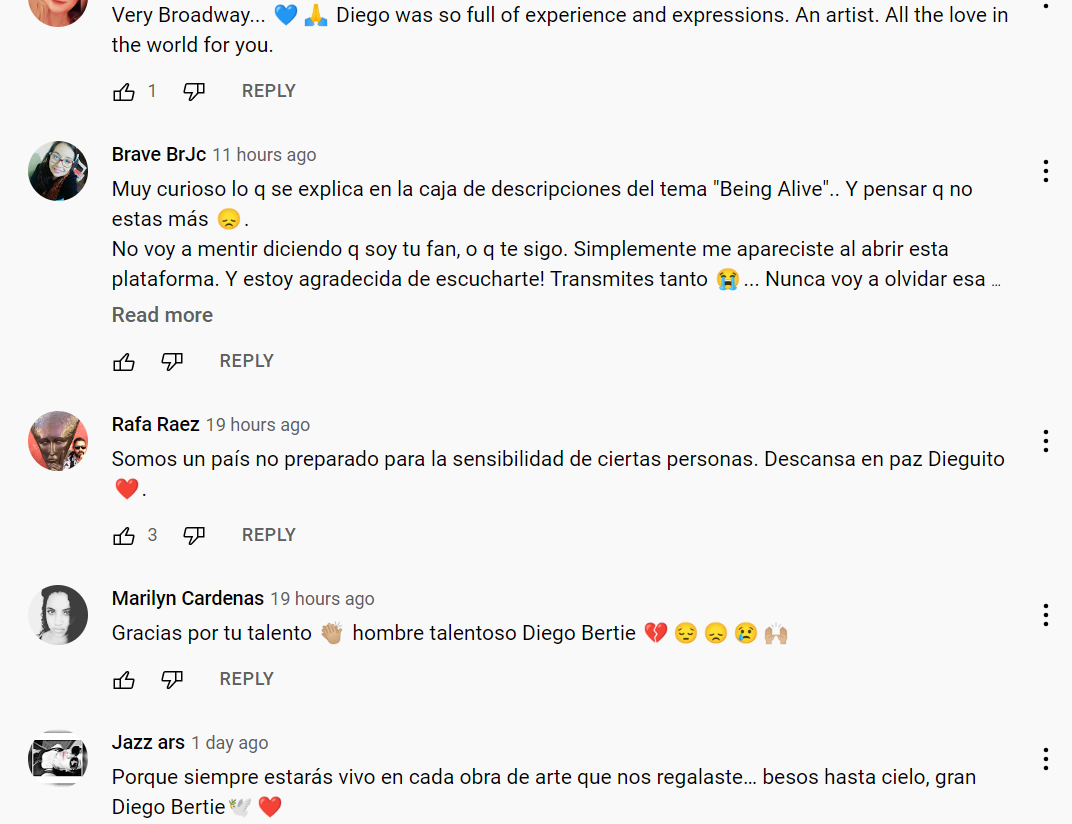 They have it present. Diego Bertie passed away on August 5 after falling from the 14th floor of the building where he lived, and since then his fans have not stopped fondly remembering him with tributes outside his home, as well as in social networks. Now, one of his previous works has resurfaced and gained recognition from these.

YOU CAN SEE: Gisela Valcárcel after the death of Diego Bertie: “The day I have to leave, respect it and don’t approach it” [VIDEO]

Two months ago, the Peruvian actor climbed on Youtube his version of a Broadway song called “Being Alive”, which means “To be alive” and netizens have been leaving him messages in the comments, saying goodbye to him with thanks.

Also, other users highlighted the great talent of Diego Bertie. “We are a country not prepared for the sensitivity of certain people. Rest in peace Dieguito” and “Very Broadway… Diego was full of experiences and expressions, an artist. All the love in the world for you,” they expressed.

“It is so rich to listen to you, you give and transmit so much tranquility, so much peace… Thank you for that and for all the work you have done for all of us, there was still more to give us but only God is the only one who knows why… FLY HIGH DIEGO BERTIE”, they added.

“The theme “Being Alive”.. And to think that you are not here anymore. I am not going to lie saying that I am your fan, or that I follow you. You simply appeared to me when I opened this platform. And I am grateful to listen to you! You broadcast so much… Never I’m going to forget that news that hit me, despite never having met you, I was totally perplexed that my eyes watered… I don’t know… I can’t explain it well but… I cry to know that you’re not there anymore, “were other messages .

Finally, some users pointed out that this video of Diego Bertie it was an omen. “Did you try to tell us something through this cover?” and “It was clear that he was not well, as he claimed. This news does not really surprise me. RIP”, and they wished him peace. 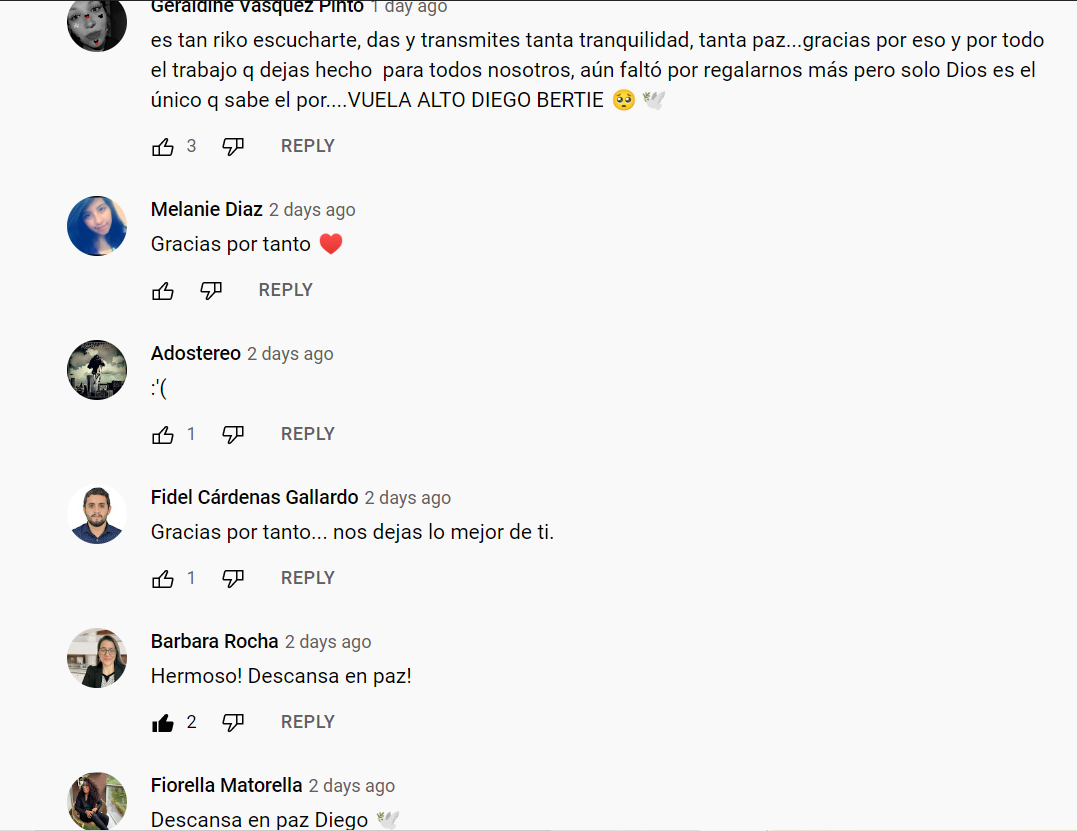 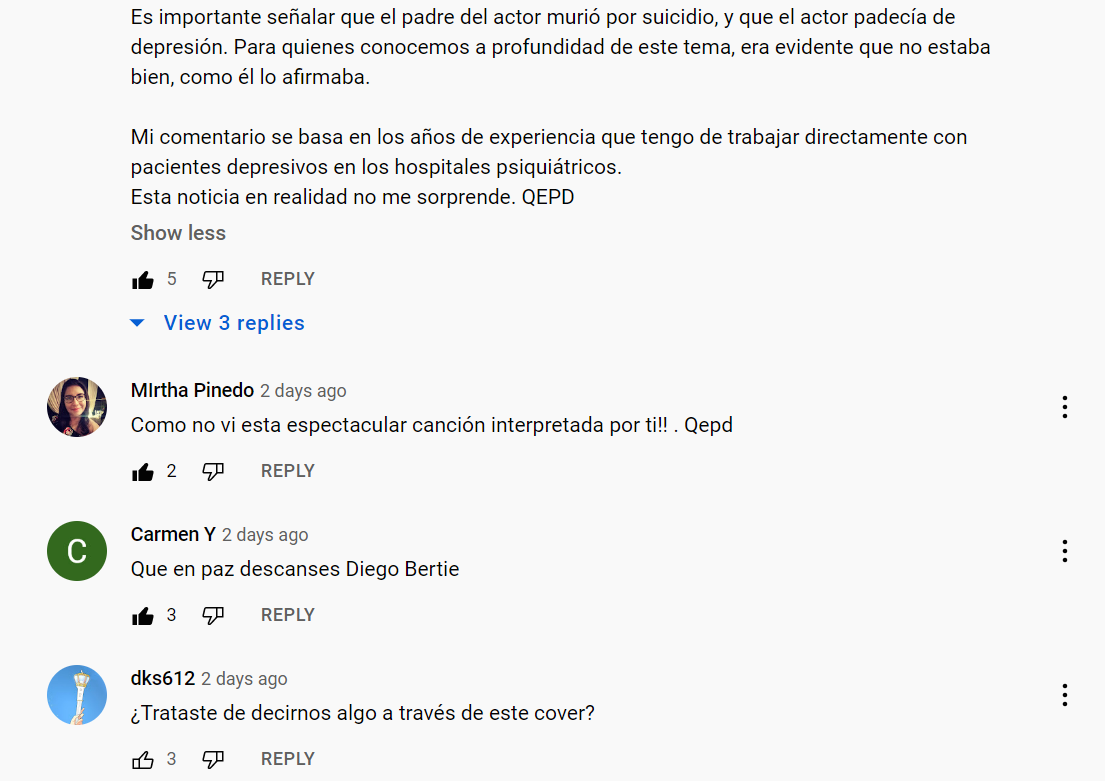 YOU CAN SEE: Ethel Pozo remembers the last time she saw Diego Bertie: “We talked in court, an incredible human being”

Efraín Aguilar remembered how well he got along Diego Bertie with his colleagues from Al fondo hay lugar, whom he would even have considered family, and he was quite excited.

“It is part of a work formula that I have always had, seeking that co-workers have a relationship that goes far beyond the employment relationship, that is talks, meetings, parties, we get to know the problems of our families, make the group sits like this, a working and personal brotherhood was formed,” he concluded.