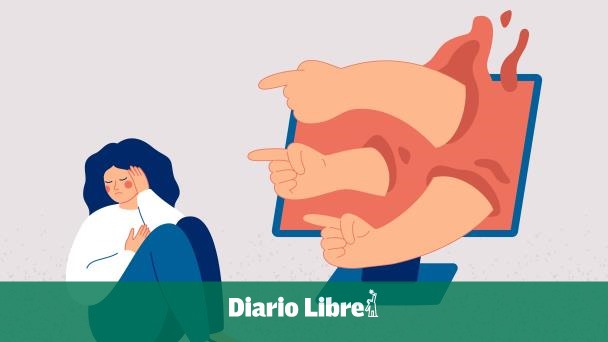 Globally 52% of young women and girls have experienced abuse online. This is confirmed by the World Wide Web Foundation survey, which highlights the sending of images, videos or private messages without consent, hateful and humiliating messages, or sexual harassment, among the most frequent cybercrimes. A type of violence that grew during the pandemic and that has become one of the consequences of gender-based violence against women and girls with the development of new technologies, where “every time there are more ways to silence and exclude women.” women in the digital space”, confirms a UN Women report.

Our country is no stranger to this form of violence, which, this UN Women report continues to explain, usually attacks and threatens very specific profiles: “human rights defenders, journalists, activists and women who participate in public activities.”

This is the case of Gabi Desangles, communicator and actress, who in recent years has been vulnerable to messages of violence that reach her through social networks and that she describes as “misguided and quite cruel”. “For me the experience has been hard, but I understand that I am not the only one and that my work allows me to understand it better, although it is still difficult,” confesses the communicator.

It’s not the only one. The director of Plan International in the Dominican Republic, Virginia Sáiz, highlighted in 2021 that, according to a recent study published by that entity, 94% of adolescents (women and men) in the country reported that they had suffered some type of abuse virtual, one of the highest indicators that exist with respect to other nations.

What is digital gender violence

The digital violence towards women is characterized by the violation of rights through digital or telematic services. In the words of the neuropsychologist Oom Blanco, it is exposure as an object of enjoyment or an instrument of pleasure and represents an obstacle to secure access to communications and digital information, generating psychological, emotional and social consequences.

This type of violence includes different forms of abuse ranging from cyberbullying, hate speech, disclosure of personal information through the internet, sexual abuse to exploitation, blackmail, gender misinformation and attacks on freedom. expression.

Young women are affected by digital sexual violence, especially the dissemination without their consent of intimate audio, images or videos. According to the NGO Taller de Comunicación Mujer, these abuses are related to the lack of understanding of the dimensions of sexual consent, as well as the exercise of domination over the victims that transgresses the limits of their identities and intimate and daily decisions.

One of the obstacles to digital violence is that it is less visible than physics. However, Blanco clarifies that the key point to identify it is that there is generally intentionality in it. “It is not always possible to control how the other may react and it is a very gray line, because anyone can interpret as violence a comment that, although it affects them, does not necessarily attack them,” he explains.

The psychological and emotional repercussions of digital abuse can be very varied, depending on the way in which the woman is a victim. “For example: feelings of depression, anxiety, stress, fear or panic attacks in cases of cyberbullying, suicide attempts by women affected by the non-consensual distribution of sexual images,” says Blanco.

The way in which they relate can also be affected, since those who suffer this type of abuse are people who have difficulties to socialize, isolate themselves, have difficulties in family communication and present a constant feeling of paranoia and loneliness. Likewise, that woman may feel guilty about the situation because she thinks that she has provoked it in some way, which is why many times they do not report her abuse.

In the end, a consequence of gender-based violence against women and girls in Information and Communication Technology is that more and more ways are found to silence and exclude women from the digital space,” says the UN report. Women.

This is not the case for Gabi, who considers that “experience has given her the strength and understanding to understand that it is not worth paying attention to comments full of hate and frustration.” For the communicator, social networks come to have the power to mislead about the purposes of people, forgetting, on occasions, what really matters, just to give satisfaction to others, you get to lose valuable moments by putting the attention on social networks.

“Social networks come to have the power to mislead about the purposes of people, forgetting, sometimes, what really matters, just to give satisfaction to others, you get to lose valuable moments by paying attention to them. We come to put our self-esteem, happiness and even what we want for ourselves in the hands of others. The great challenge for everyone, nowadays, is to see social networks for what they are: a game, a platform to share, but not to define ourselves”, he says.

How to fight against cyber gender violence

to fight the digital violence towards women there is no formula, considers the neuropsychologist Blanco. What can be done is to start educating from respect and tolerance in differences, as well as give visibility to this problem and prosecute crime. As reported by Taller de Comunicación Mujer, we must break with the idea that digital gender violence, because it is virtual, is not real and, therefore, does not affect the lives of people and their environments.

Gabi Desangles also feels this way: “The feeling caused by violence on social networks is no different from the feeling generated by violence in physical life: it leaves the person vulnerable and attacked, but with the aggravating circumstance of not knowing who to blame, which is frustrating.”

And to act against gender cyber violence, in our country some voices are already raised to request the approval of legislation or executive actions that, hand in hand with the National Congress or the Central Government, elaborate public policies that protect women in social networks and other technological platforms. “Thinking that women can only suffer gender violence in the home is an archaic way of thinking,” says Ángel García Collantes, a criminology expert at CEF Santo Domingo. And it is that, according to the specialist, “it is of little use for a prosecutor to issue a restraining order, when the perpetrator has the power to access his objective through his various social network profiles, instant messaging platforms such as WhatsApp or even the digital channels of your loved ones or relatives. It is necessary that the protection mechanisms against the abused are installed, accessible and provide an efficient service”.