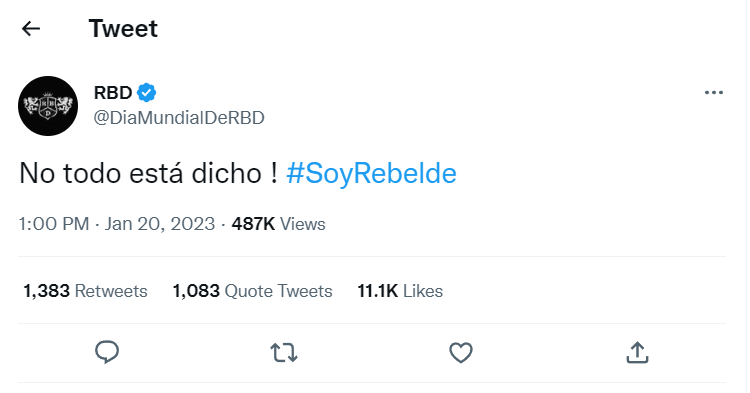 RBD is back after a long absence to the delight of its thousands of fans, who will be able to enjoy them on stage once more after 15 years of their separation. It was confirmed that the group will go through several cities in the United States, Latin America and Mexico on the goodbye tour, which will be called “Soy Rebelde Tour 2023”. Now, the group has published a mysterious message through its official Twitter account, and has once again left its most loyal followers in suspense.

YOU CAN SEE: RBD will not come to Peru on their 2023 tour: where will the Mexican group perform?

Peru was not included in the list of countries

“I am Rebelde Tour” it will begin on August 25 in El Paso, Texas, will tour the US, will pass through Brazil and finally conclude in Mexico, where RBD will have three concerts. On this occasion, the group did not consider Peru as one of the tour destinations. However, recently through Twitter, the RBD account shared a message that has aroused the illusion of more than one. “Not everything is said!”. Will they announce new countries on their tour?

RBD puts you on edge again with a curious publication. Photo: Twitter

YOU CAN SEE: RBD announces its return to the stage with the “Soy rebelde world tour” tour: will it come to Peru in 2023?

Prior to this news, at the end of 2022, the members held an intimate meeting at the home of the actress and singer Anahí, her partner being the actor Alfonso “Poncho” Herrera, the great absentee at said dinner and in this reunion of the group .

Let’s remember that it was last 2020 in the midst of the confinement by Covid-19 that RBD had a fleeting reunion – with Anahí, Christian, Christopher and Maite being the only participants – through a successful concert via streaming coupled with the arrival of the entire musical catalog from the band to digital platforms.