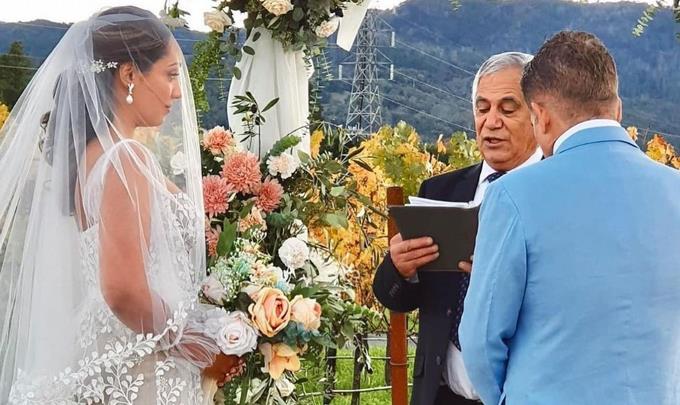 In the last decade, the local entertainment scene has dressed up to celebrate marriages with its unforgettable figures that have transcended television and social networks.

They are celebrations that sometimes surprise people, such as the newly married television producer Iván Ruiz and his partner Laura Guzmán, who on Wednesday shared the images of the link that took place in romantic Napa Valley, California.

With a limited number of guests, which included the filmmaker Alfonso Rodríguez and his partner, the producer of “The Midday Show” and the communicator became husband and wife.

“The happiest day of my life,” Laura Guzman posted on Instagram along with a photograph dressed as a wedding, by designer Luis Dominguez. While Ruiz did the same dressed as a groom with a blue suit: “Here is… the way to happiness. Thank you God, ”he wrote.

“I am a fan of Californian wines and what better way to celebrate my wedding night with the groom of my life,” Guzman said in a video with the communicator as they enjoyed an evening in front of the fireplace with two glasses of wine.

It is recalled that last August Guzmán announced that his separation from the producer and communicator: “Iván and I decided to end our relationship in the healthiest way,” he said at the time.

There are also weddings so overexposed, like that of the journalist Franklin Mirabal and the television presenter Dianabel Gómez. The couple generated media attention and the link became an event classified as a reality show.

In February 2019, people saw the sports journalist cry with emotion at the consummation of “The Sports Wedding”, which was sponsored by the famous former player Sammy Sosa and which was attended by various personalities from public life.

More surprising was also the announcement of the divorce, in March of this year 2021, although they had been battling problems in the relationship since the end of 2020.

Before the divorce, the protagonists of this sad story began to accuse each other in public. Accusations of defamation, abandonment, restraining order and even taking away the vehicle are some of the chapters that were part of one of the separations with more “sound” of local entertainment.

Currently the journalist maintains a relationship with Penny Báez, a young woman from Jarabacoa, with whom he has been seen wasting honey on social networks and as he himself has said: “more in love than ever.” And he even proposed to her. They even had a wedding date, which was postponed until further notice.

Another case: in early 2021, on a Sunday in January, television entertainer Caroline Aquino She posted an image dressed as a bride and the magic phrase: “With God”, making it known that that day she would be married together with her son’s father, Luis Almánzar.

The wedding of the presenter of the program “De Extremo a Extremo” (Digital 15) was not planned, it was only enough that they asked her to marry him so that the casatorio was set up.

On the other hand, in the summer of this year communicator Gabi Desangles He broadcast live, through his social networks, his glamorous wedding with José Chabebe. His followers flocked to see all the details of the event, especially her beautiful dress made by Luis Domínguez.

In November 2014, the Univisión cameras moved to the municipality of Loma de Cabrera to cover the marriage of the merenguero Fernando Villalona and his wife Fátima Vicioso.

A wedding that transcended the international press was the link between former Miss Universe Amelia Vega and basketball player Al Horford. The impressive residence of the famous composer and singer Juan Luis Guerra and his wife Nora Vega, uncles of the bride, was the setting for the surprising event.

Another commented wedding was that of Manny Cruz and his wife Yeri Peguero, in July 2015. He had the peculiarity that the bride suffered a slight faint that took time to recover. In a video that the couple shared a few months later, Yeri was seen vomiting and Manny drying the sweat of his future wife who was fading from dizziness.

If there was a link that brought together an entourage of celebrities, it was that of the communicator Sergio Carlo and his wife Gabby Arriaza. The ceremony took place in Jarabacoa in January 2016. In 2018 Yubelkis Peralta married businessman Marcos Bona and it was at the Santo Domingo Country Club.