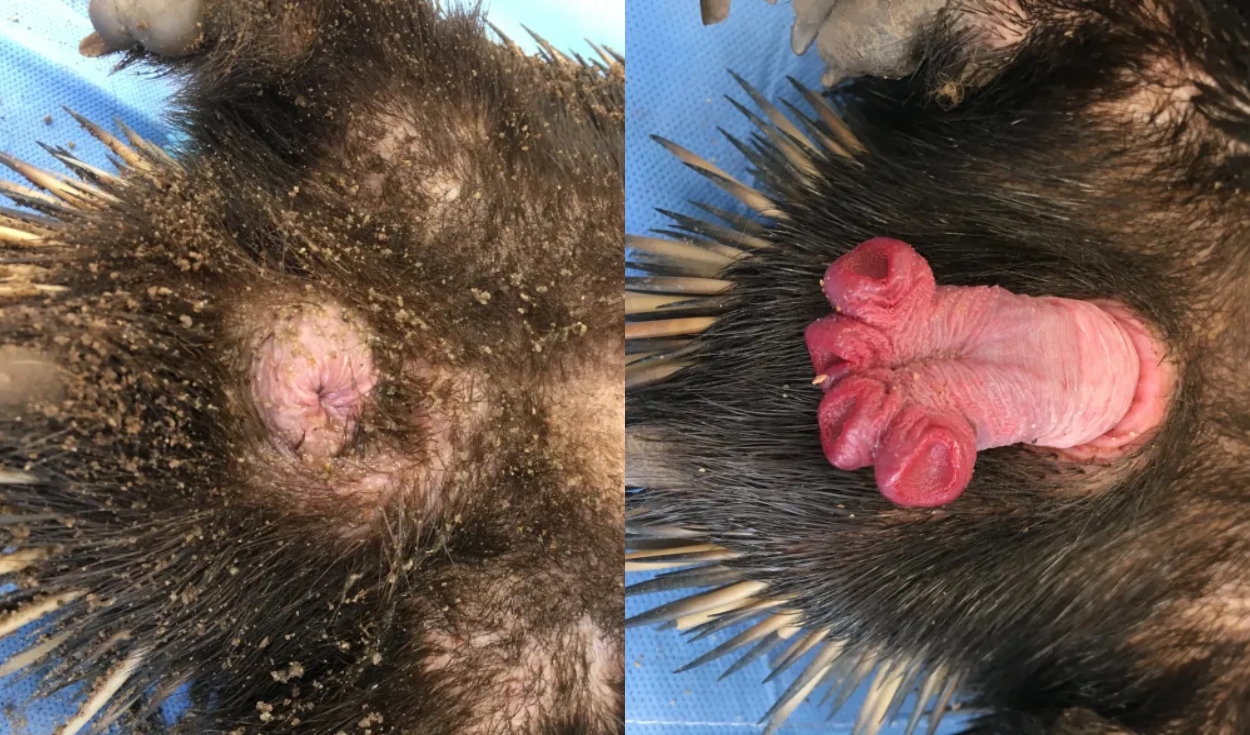 With a body similar to that of a hedgehog, echidnas are one of nature’s most mysterious animals. The reason is because, along with platypuses, their ‘close cousins’, they are the only species of mammal that lays eggs. But there is a much more unique trait in this animal that feeds on ants and that is that the males have a penis with four glans.

Like platypuses, echidnas (Tachyglossidae) belong to the taxonomic order of monotremesa group of primitive mammals that retain characteristics of reptiles, such as their oviparous reproduction and his sewer (a hole where the urinary system, the reproductive system and the digestive tube open).

The mystery of the echidna’s ‘quadruple penis’

The penis of male echidnas has four rosette-shaped glans, only two of which are used during copulation. But that does not mean that the other half is not useful, but that they use it in a later sexual encounter. In other words, its functionality is rotary.

For several years, the reproductive anatomy of these mammals had been a mystery; However, in 2021 an international group of scientists, led by Australian biologist Jane Fenelon, managed to decipher its operation for the first time after replicating the sexual member of a domesticated male echidna in a 3D model.

When not in use, the echidna’s ‘quad penis’ remains hidden. Photo: Jane Fenelon/University of Melbourne

Fenelon and his colleagues described in their scientific paper that, unlike other mammals that have a single urethral duct, in echidnas the urethra splits in two, each branching again at the end of the penis.

Now, why don’t all four glans work at the same time? The reason is due to the characteristics of your two erectile tissues. These are the corpus cavernosum and the corpus spongiosum: the first is responsible for maintaining the erection and the second for ensuring that the urethral conduit remains open during the rigidity of the member.

In most mammals, both tissues are separated at the base of the penis, but later merge into one. But this does not happen with echidnas, in which the cavernous bodies merge, but the spongy bodies remain as two distinct structures.

This results in the end of the echidna’s penis acting as two separate glans. Thus, blood flow can be directed to one side or the other of the corpus spongiosum to control which half becomes erect and which branch of the urethra remains open.

Echidnas only inhabit the islands of New Guinea, Salawati, Australia and Tasmania, territories where the first specimens were discovered by British biologist George Shaw in the 18th century.

Antique drawings of the anatomy of the reproductive limb of a male echidna. Photo: Luis Monje/National Geographic