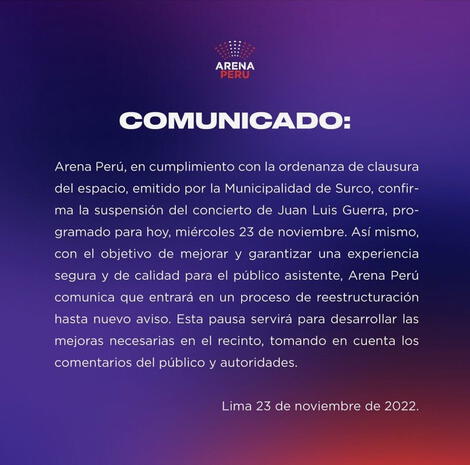 A noble gesture! The renowned singer Juan Luis Guerra He is in the midst of a great controversy after his second concert was canceled after the closure of the Arena Perú venue. However, his thousands of fans were extremely mortified at the unexpected situation.

YOU CAN SEE: “Fans with tickets did not enter”: Indecopi begins investigation against Juan Luis Guerra’s concert promoter [FOTOS]

As is known, despite the fact that from the early hours of this Wednesday, November 23, it was announced that the Dominican singer’s show was no longer going, dozens of fans of the foreign artist decided to queue outside the Arena Peru without losing hope.

However, another group of fans went to the Miraflores Park Hotel where the singer is staying Juan Luis Guerra In order to see him and without imagining his idol, he decided to go out to take pictures with them, demonstrating his great humility.

It should be noted that the producer of the event also spoke. “The production offers its most sincere apologies for the inconvenience this may cause to the public that was hoping to enjoy the second show of the Dominican star. In the following days it will announce the refund procedure for all tickets in coordination with Teleticket,” pointed out.

YOU CAN SEE: Juan Luis Guerra in Lima: This is how the fans reacted when they found out about the cancellation of the concert

After the Municipality of Surco decided to close the local Sand Peru, They decided to come forward to issue a statement and surprise by announcing that they will be in restructuring after the cancellation of the concert of Juan Luis Guerra.

“With the aim of improving and guaranteeing a safe and quality experience for the attending public, Arena Peru announces that it will enter into a restructuring process until further notice. This pause will serve to develop the necessary improvements in the enclosure, taking into account the comments of the public and authorities”, they explained.