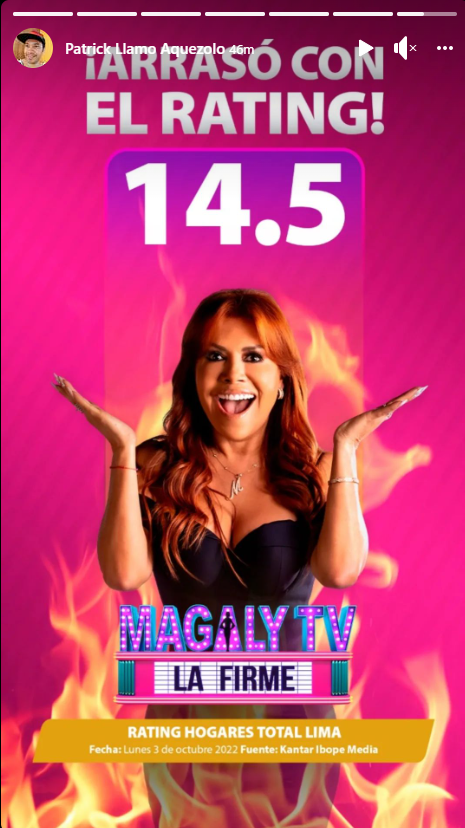 All a success! Magaly Medina is on everyone’s lips after responding to Gisela Valcárcel LIVE, admitting that she has made many judgments that she finally lost. This situation reaped its fruits before the public, as it swept the rating.

YOU CAN SEE: Rodrigo González reminds Magaly Medina that she also ignored the press: “Gisela is not the only one”

Everything was revealed in social networks, thanks to the producer of the Urraca, Patrick Llamo, who did not hold anything back and shared the numbers he obtained after his last edition, last night, Monday, October 3. This showed that he is the happiest with the facts.

According to Ibope Media, Magaly Medina came to dazzle the people of Lima, because in the capital city she achieved 14.5 rating points, which is even more than the points that El Gran Show scored last Saturday, October 1. On that day, Gisela Valcárcel only achieved 12 points.

“It swept the rating! 14.5 points from Magaly TV La Firme. Raying total households Lima. Date: Monday, October 3. Source: Kantar Ibope Media”, is the message that can be seen in the capture that shows the rating it obtained la Urraca, placing herself as one of the favorites on TV.

It should be noted that although Magaly Medina obtained 14.5 rating points, she would not have the most watched program on national television, since days before Rodrigo González stated that Luz de Luna, Michelle Alexander’s telenovela, would be the most popular production.

YOU CAN SEE: Producer of Magaly Medina applauds her response to Gisela Valcárcel LIVE: “The Great Show” [FOTO]

Magaly Medina revealed an unpublished photo of the time she met with Gisela: “She told me about Carmona and Tula”

Following the statements of Gisela Valcarcel At the first gala of ‘El Gran Show’ after saying that Magaly Medina cried for him at the meeting they had 2 decades ago, the Urraca dotted the i’s to tell the truth about the Milanese.

“(Eric) Jurgensen stops and at one point Gisela tells me the truth about what happened with Carmona and Tula, that she went to my husband’s office (…)” I always saw her as a betrayed woman (…) .) but that time was the only thing we talked about. At that time, I was fighting with my boyfriend, now my husband (…) I never cried at any time,” he said.