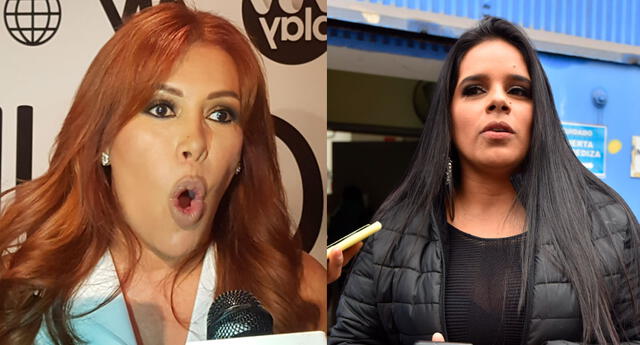 Strong and clear. The television host Magaly Medina spoke after what Giuliana Rengifo from Cumbiambera said after being supported by the notary Pucallpino, Paul Pineda. Given this, the journalist Magaly TV: The Firm He responded to the singer who warned him not to mention her anymore in his program or he will send a notarized letter.

YOU CAN SEE: Magaly Medina shares a post with her husband after ampay: “We continue dancing and laughing” [VIDEO]

As remembered, Giuliana Rengifo commented to El Popular that the entertainment journalist Magaly Medina I would be looking to harm her. “I do feel that Magaly wants to hurt me,” she assured. Therefore, he does not rule out taking legal action against her.

Medina replied: “There are very funny people in entertainment. I am used, as I said, to dealing with all kinds of vermin from our beloved ‘Chollywood’. For me there are no untouchables in entertainment,” he said at first.

“I think that many, in this environment, believe that they can open their mouths and release all kinds of infamies about me, because since I don’t have a ‘straw tail’ and I don’t feel uncomfortable. 25 years ago, when I decided to enter this jungle, I became into a beast that no one has been able to devour,” he added to Trome.

YOU CAN SEE:Magaly Medina to Giuliana Rengifo after ‘ampay’ with a married notary: “Will you know about the 20-year marriage?”

The ‘redhead’ wants to deny the former singer of Agua Bella and for this she pointed out that this September 20 they will reveal the story behind the protagonists of this ampay, because she did not have enough time in her program to release everything.

“She’s single and he’s separated, he’s separated… aha. You know that behind every ampay there is a story and this is chapter 1 of our new telenovela because this is just beginning, “she said.