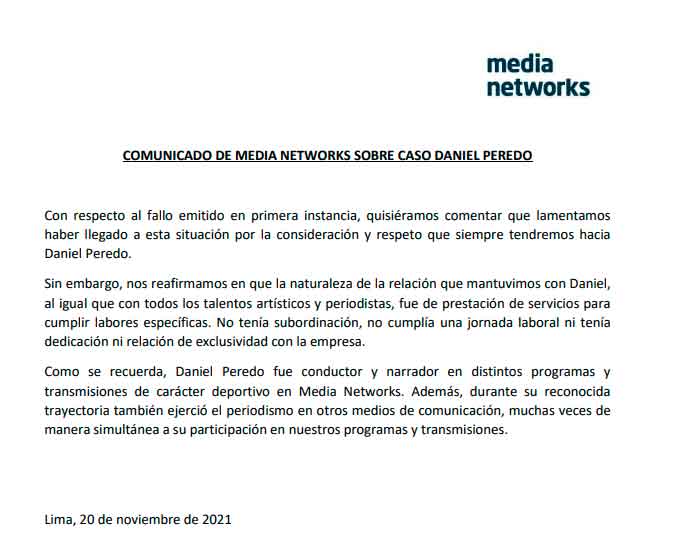 Movistar, through Media Networks, ruled after having lost the lawsuit against Daniel Peredo’s wife, Flaming Miracles, Since the Superior Court of Lima has forced the company in question to pay the journalist’s family more than one million soles.

The communications company tried to have a Solomonic response, but that was not so reflected in its statement in which it highlights the contractual relationship that, according to Media Networks, kept with Peredo.

Although for more than Movistar has tried to show that they do not have to pay Daniel Peredo’s wife, the Superior Court of Justice of Lima (CSJ) has forced the company to pay 1 million 500 thousand 20 soles, so the company must comply with the norm .

Let us remember that Daniel Peredo’s wife, Milagros Llamosas, has defended the image of the journalist tooth and nail, and gained greater notoriety and exposure when – pitifully – the narrator lost his life.

Finally, the Media Networks (Movistar) brief does not explicitly indicate that they will appeal the ruling, but it can be read that the company does not agree to pay S / 1,536,020.76.

“With regard to the ruling issued in the first instance, we would like to comment that we regret having reached this situation because of the consideration and respect that we will always have towards Daniel Peredo.

However, we reaffirm that the nature of the relationship we had with Daniel, as with all artistic talents and journalists, was one of rendering services to fulfill specific tasks. He was not subordinate, did not fulfill a working day, nor did he have a dedication or exclusive relationship with the company.