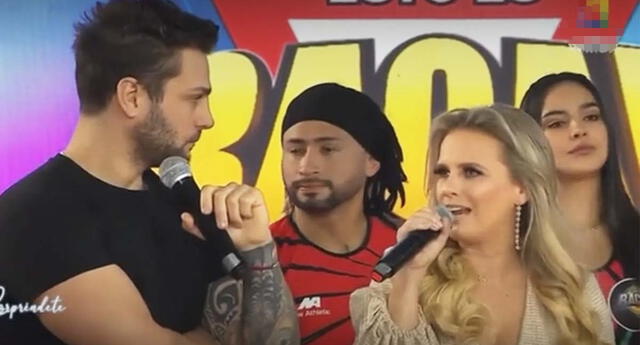 The reality boy Nicola Porcella made strong revelations about his family life and recalled that when he was a child he went through a hard time not being able to spend time with his mother. It turns out that his mother had to go to work in the United States.

YOU CAN SEE: EEB: Nicola Porcella blames Zumba for disrespecting Rossana: “Why don’t they eliminate it? [VIDEO]

The former member of This is war During the reality show called ‘Challenge 4 elements’, he announced that his mother Fiorella Solimano lost her custody of him and his brother, this when he was 8 years old.

“I was 9, 8 years old, my brother was 3 years younger, as a result of immaturity, of the fights, of everything we had been through, my father takes my mother’s children away,” he said.

“Then they take me and my brother to a court to declare who we wanted to live with, but we were very young and we already went with a premise, so we had to say that we were staying with my dad. Since that time I have not lived with my mother, many relatives told me that ‘your mother was not good’, but from then on, over time, I opened up a little more, I am a super tough person, as you have seen me ” , he added.

Nicola Porcella indicated that he preferred to keep these issues to himself, but this time he decided to open up with his teammates. “These are things that I had never told because I never liked being seen vulnerable (…) this coexistence makes you different, that is, it is making me a much more sensitive person, which I was not,” he said.

“I’m kind of ashamed to show that side of me, I’ve always wanted to be the one to take the bullets,” he said.

YOU CAN SEE: Rossana Fernández praises Nicola Porcella for standing out in Mexico: “You are a source of pride for our country”

Rossana Fernández flatters Nicola Porcella for standing out in Mexico

A few days ago, the controversial influencer and former reality boy, Nicola Porcella, He intrigued his followers with some phrases that hinted at his entry into the Esto es Bacán program. However, this September 10, the public figure confirmed his entry by being presented through the front door in the competition reality show.

YOU CAN SEE: EEB: Nicola Porcella blames Zumba for disrespecting Rossana: “Why don’t they eliminate it? [VIDEO]

What does Nicola Porcella think about Joselito Carrera?

The former reality boy, Nicola Porcella, referred to the comparisons with Joselito Carrera, who made her beautiful with her participation in Mexican soap operas.

Given this, he marked distance. “The soap operas are starting now (…) no, I’m going to record one from here too, that’s where it came out in my stories (…) they covered my tattoos, which is for the Televisa platform,” she said.