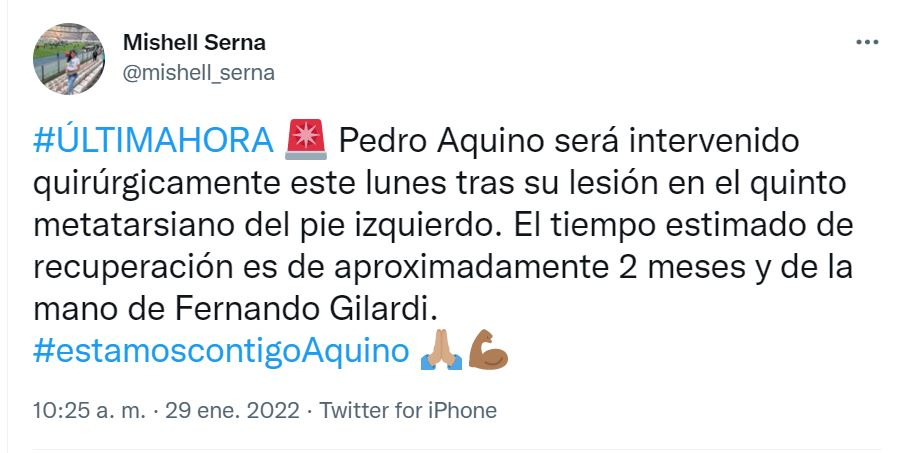 Bad news came in the middle of the celebration of Peru’s victory against Colombia. Pedro Aquino, who was not called up for this double date of the Qatar 2022 Qualifiers, will undergo surgery and will miss the World Cup.

According to the journalist Mishell Serna, the América de México player will undergo surgery on Monday, January 31 after suffering an injury to the fifth metatarsal of his left foot.

His recovery could take up to two months, so he could also miss the next duels with the Peruvian team against Uruguay, in Montevideo, and Paraguay, in Lima.

From charras lands, the coach of America, Santiago Solari He spoke to the press about the injury of Pedro Aquino, who lamented the lack he does in the Mexican team.

“We know little. Hopefully it’s light. He is a very important player on the squad. We have not had good recent experiences. It was hard not having him in the decisive phase. It is a very hard loss, ”said the Argentine at a press conference.

Meanwhile, the president of the ‘Eagles’, Santiago Bañosindicated that they have already contacted the Peruvian Football Federation for the return of Pedro Aquino to Mexico.

“He will be arriving in Mexico soon to do his necessary tests and see how serious the injury is. Based on that we will make a decision,” she said.

After the surgery, the “Roca” will undergo rehabilitation with the physiotherapist of America Fernando Gilardi, who previously worked at Sporting Cristal.

Pedro Aquino has participated with the Peruvian team in 10 games in the Qatar 2022 Qualifiers.