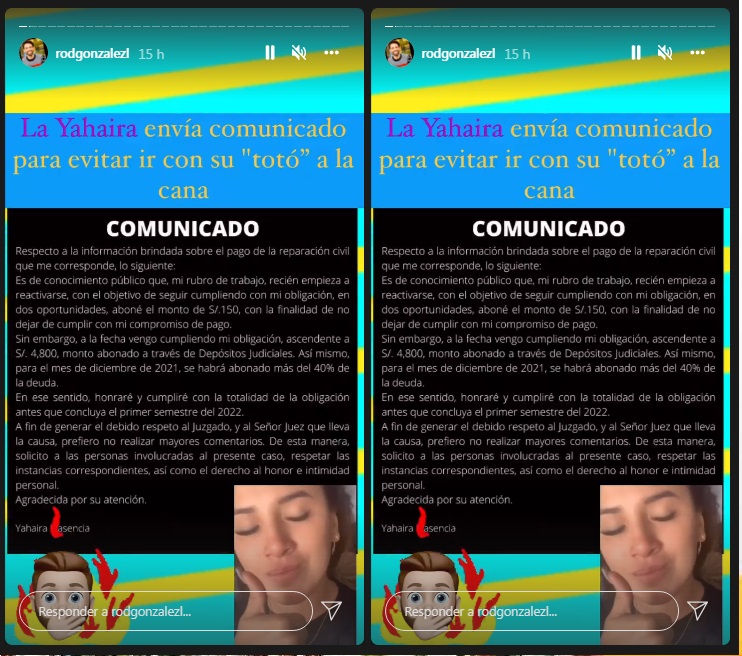 He doesn’t want to go to jail. The television host Rodrigo González launched a hilarious phrase after the singer Yahaira Plasencia spoke out via a statement about the reasons why she only paid 150 soles of 20 thousand soles for civil reparations to Olenka Mejía, this after the threat of a lawsuit for not complying with measures established in the trial that his ex-sister-in-law won him.

“It is public knowledge that my work area has just started to reactivate, with the aim of continuing to fulfill my obligation, on two occasions, I paid the amount of 150 soles in order not to fail to fulfill my payment commitment … “, dictated part of the message that the sauce boat shared via its social networks.

This did not go unnoticed by the popular Peluchín, who, very faithful to his style, launched himself with everything commenting on why the ‘Queen of Toto’ decided to pronounce on accusations that Olenka Mejía made against her for not complying with civil damages after winning a defamation lawsuit.

Yahaira does not want to go to jail and defends Olenka Mejía: “I have been fulfilling”

Yahaira Plasencia assures that to date he is paying the amount of more than 4 thousand soles to Olenka Mejia, and that paying him first only 150 soles was for the record that he does comply.

“I have already been fulfilling my obligation, amounting to 4,800 soles, an amount paid through judicial deposits … By the month of December 2021 more than 40% of the debt will have been paid,” he added Yahaira Plasencia, also asking that their honor and personal privacy be respected.