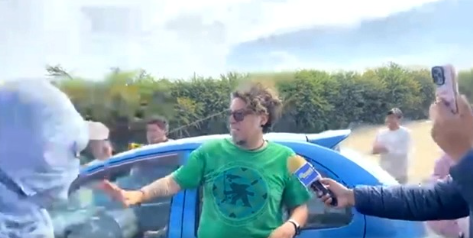 the singer-songwriter Pepe Alva He became a trend on social networks this January 19 after photos of him singing the song “Matarina” were released during the blockade of the Panamericana Norte in the province of Virú towards Trujillo. The musician was with his wife, his daughters and even his mother inside the vehicle; however, the protesters would not let him pass, until a reporter identified him. Immediately, the users demanded that he sing that song in order to continue on his way.

Through an extensive message on his social networks, he explained how the events occurred. “Finally, we are past the demonstrations, pickets and blockades! We are already in Trujillo safe and sound. Thank God and the ‘Matarina‘” he wrote at the beginning. Then he explained that they had been stranded for three days in the town of Valle de Dios, in the district of Chao.

YOU CAN SEE: National strike: entertainment figures calling for calm in the face of a wave of protests in Peru

Pepe Alva remained stranded for several days with his family

“This morning it was already the third day and I decided to move on. We had two unsuccessful attempts to get out, with some slightly upset and dangerous protesters giving us threats to burn our car, even with my mother and my twins in the car,” he said. Pepe Alva in his Instagram post.

“Ana María, my wife, didn’t want us to go out today either, but I took courage and told her to leave early. We were able to pass the Chao blockade for a truce that they gave for half an hour, but the Virú blockade was coming, which was the most dangerous, ”he added.

YOU CAN SEE: Fresialinda, Rosita de Espinar and other artists support protesters from the south: “We are not indifferent”

Pepe Alva sang “Matarina” to continue on his way to Trujillo

Later, Pepe Alva He narrated how he began to sing “Matarina”, a song created by Miguel Ángel Silva Rubio, better known as ‘Indio Mayta’. “Suddenly we arrived at the largest picket, with tire fires, but we were leading the blockade. The smoke from the tires was intoxicating us, things were getting more and more turbulent, they told us that we might pass, but it wasn’t safe. We explained to them that we were with girls and an older adult, but it seemed to have no moving effect on them,” she said.

“There was a reporter doing interviews with people. He suddenly he approached me. The guy recognized me, he insisted, and I couldn’t help but lower the glass and answer him. He said out loud: ‘It’s Pepe Alva, the national singer of ‘Matarina’, and automatically the demonstrators shouted: ‘Let him get out of the car and sing; if he sings, we let him through.’ The rest is history. Here I am, already in my Trujillo, safe and sound with my family, thanks to God and to ‘Matarina’!” He concluded.

YOU CAN SEE: Jason Day asks that they let protesters march and Mario Hart responds: Come on, join us!

Famous Peruvians did not remain silent after the wave of protests and roadblocks in various areas of Peru. Figures like Rebeca Escribns, Melissa Paredes, Karla Tarazona and Kurt Villavicencio called for peace and unity in these difficult times.

“Everyone must be heard, it must be done through peace. When they are in the province, they are not listened to, but we do not want more deaths, more grieving families. No to violence, reach a dialogue”, said Rodrigo Cuba’s ex.

Lucho Cáceres participated in the March for the Taking of Lima

Another of the characters from the world of entertainment whose presence did not go unnoticed in the massive march that took place on January 19 to protest against the Government of Dina Boluarte and Congress, was the actor Lucho Cáceres.

The interpreter attended Kennedy Park in Miraflores and joined the dozens of protesters who were marching in troops. Likewise, he showed his social media community how the day was lived.