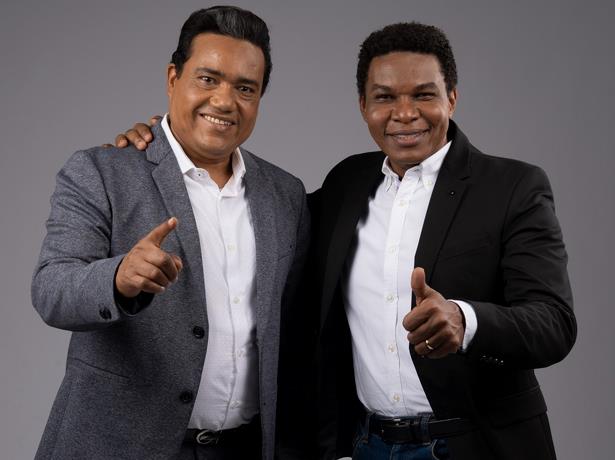 In Miguel Céspedes’ family house there was only a spoon and a toothbrush, utensils that were exclusively used by the father, the other members ate the food with their hands and to brush their teeth they did it with their fingers or they used charcoal that they obtained from the kitchen stove.

In another house or bohío (bojío) as they called it in the fields of the country, parents with 10 children (including Raymond Pozo) locked themselves in the house to tell them stories those days that there was nothing to feed them, and thus entertain them.

These remembrances recreate the childhood lived by the comedians Miguel Céspedes and Raymond Pozo, respectively, who on December 2 will premiere in the cinema the biopic “The life of the kings”, directed by Frank Perozo.

Now, laughing, Miguel, who was born in the Carrera Yegua field, in the province of Azua, recalls that although he cleaned his teeth with charcoal, and one of the happiest days of his childhood was when he received a kit with a small brush and a toothpaste, without ever imagining that today it would be the image of the prestigious brand that everyone knows worldwide.

For Raymond, those moments of severe scarcity, when their father locked himself in with them to distract them from hunger by telling them stories. It is precisely when the comedian was born, who dazzled with his tongue twisters and characters even Don Francisco on Univisión.

“He was small, but I remember him perfectly, the grace I have for humor I inherited from my father,” says Pozo.

Recreating the story of his childhood for the popular Dominican comedians was to relive, with pride, those first years of life, where economic scarcity reigned in their homes, but love and family training was superfluous.

Many are the anecdotes of this time, such as when one day hunger, around 4:00 in the afternoon, a smell of herring led Raymond to visit the neighbor’s house, an attitude that was reproached, first by his godmother, who He found him and carried him by one ear to his house. The situation was complicated because he replied with an “oh oh!” Attitude that cost him severe punishment from his mother.

“I never went back to the neighbors at lunchtime and I learned to respect the elders ”, he remembers with a laugh.

The vicissitudes were so many that when they began to write the script for the film many of the events they experienced were difficult to capture in the cinema, due to how little credible they could be for the public.

On the presentation of their lives, at first, they did not agree very much, but they were convinced because the story will be told with the intention of motivating people to fight for their dreams and reflect that material deficiencies do not matter if they have the blessing to receive love and training at home.

The film will show childhood, youth and their arrival in humor. “I still watch the movie and cry, it is no secret to anyone that we grew up in extreme poverty, but we have always said with pride and satisfaction that God gave us the opportunity to be born in poverty, but not in misery, despite not having nothing, not even how essential food is, but having family love, the love of neighbors, therefore, thanks to that for us, people will always be above material things, ”says Raymond.

“It is that without the childhood that we had, life would not have the same satisfaction that it has today when obtaining success. That childhood taught us to keep our feet on the ground and that is what gives value to life, what softens your soul, what makes you more human, ”explains Céspedes.

Despite the fact that life was difficult, already living in the Las Flores neighborhood of San Cristóbal, it is there where Raymond forms a singing and theater group that made presentations at the local club.

The group participated in a humor contest on a René Fiallo television show. The boys won second place, apparently that was the end of it, but Raymond asked Fiallo for a job and Fiallo hired him at the agency to wash the vehicles.

By then the office closed from 12:00 to 2:00 in the afternoon, and it was time that Pozo took the opportunity to go to the meridian television programs. There he met the Explosión group, of which Miguel Céspedes was already a member.

“I was amazed by the group and on one occasion I asked my friend for a job, and the rest is history,” he recalled in the interview with Listín Diario.

Miguel arrived in the capital with his mother as a teenager in the neighborhood of Villa Duarte. He was always interested in art, he liked to act and sing.

He says that he had the opportunity to be part of the Wilfrido Vargas orchestra and rejected the offer because what he really wanted to be was a comedian.

“My mother almost murdered me when she found out that I said no to Wilfrido Vargas,” he said.

+ Thankful
If there is one person that Raymond and Miguel are eternally grateful to, it is businessman Juan Ramón Gómez Díaz, president of the Telemicro Media Group, and who opened the doors to channel 5, a platform that catapulted them to the point of becoming “Los Reyes of humour”.

“We don’t have the means to pay Gómez Díaz. Every day we thank God for that great opportunity he gave us and we ask for his life and that of his family, ”says Miguel.

In the film the scenes that tell this part of the story do not mention Gómez Díaz by his real name, just as others do not mention their names out of respect for his integrity.

“Our descendants have to know that humanly we owe our success to Juan Ramón, after God. The affection, respect and gratitude will always be present on our part towards him, throughout life, and our families are aware of this ”, confessed Raymond.