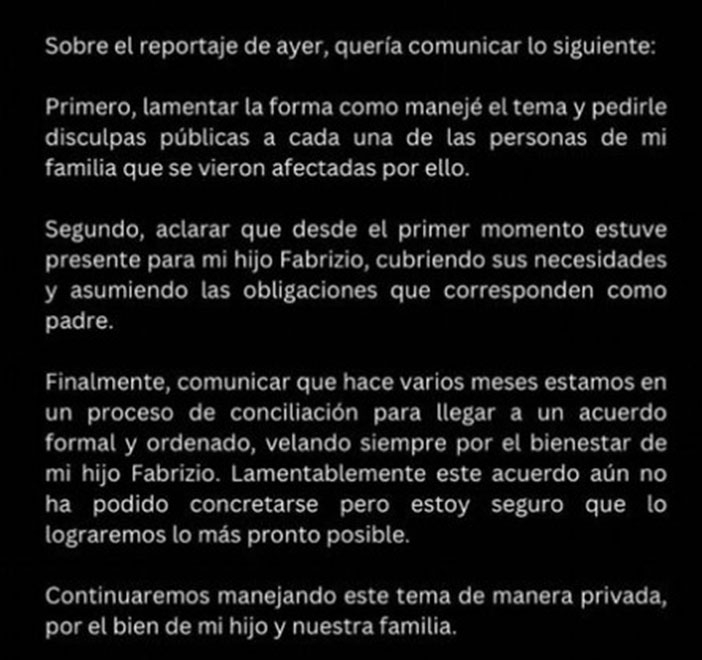 The case of the footballer Renato Tapia He continues to be on everyone’s lips after he was involved in a legal imbroglio over his unrecognized paternity towards his 8-year-old son. Daniela Castro, the athlete’s ex-partner, went, on a new occasion, to the set of Magaly Medina to reveal new details of the relationship between Tapia and his supposed cousin, José Martín Alva.

The cousin of the Peruvian national team was in charge of taking care of Daniela Castro and her little one throughout these years and even came to live with the young woman and the minor. He also kept an eye on Castro and made sure that she did not reveal the Celta player’s greatest kept secret. In conclusion, Martín Alva acted as the father figure of the infant in the absence of Tapia.

YOU CAN SEE: Tapia’s father calls Magaly’s program “garbage” and she replies: I got parents to sign their children

This time, to show that Renato Tapia rarely or hardly ever visited his son in common, Daniela Castro took an audio to the program in which she and José Martín Alva discussed why the selected one did not come home to share time with the minor . In the clip, Tapia’s cousin points out that he would also like the athlete to visit the boy more, but he is not in a position to demand such a thing.

“If at some point you think that I’m going to say to Renato ‘it’s not that the fat guy wants to talk to you.’ Do you think that I would like the fat man, perhaps, once a week, now that there is Facetime, to facetime with his father? ”, José Martín Alva was heard saying very obfuscated.

“I’m not asking. Do you know why I don’t ask? Because Renato could tell me ‘no cousin, better not’. And I’m going to break his heart and suddenly he’s going to hit me on the *** pin, so he’s a baby and I don’t. Every time he comes to Lima I tell him ‘Please go see the fat man and that’s it,’” he added.

Renato Tapia only saw his son in “his spare time”

In that same audio, the relative of Renato Tapia assures that the athlete only came to see his little one in his spare time. “He makes a little hole and goes to see the fat man so that the relationship is always maintained. If you ask me if this is okay, this is up to the *** for me. I don’t share that,” says the young man.

These statements deny the statement by Renato Tapia, who on January 24 stated that he was always present for his heir Fabrizio, “covering his needs and assuming the obligations that correspond to him as a father.”