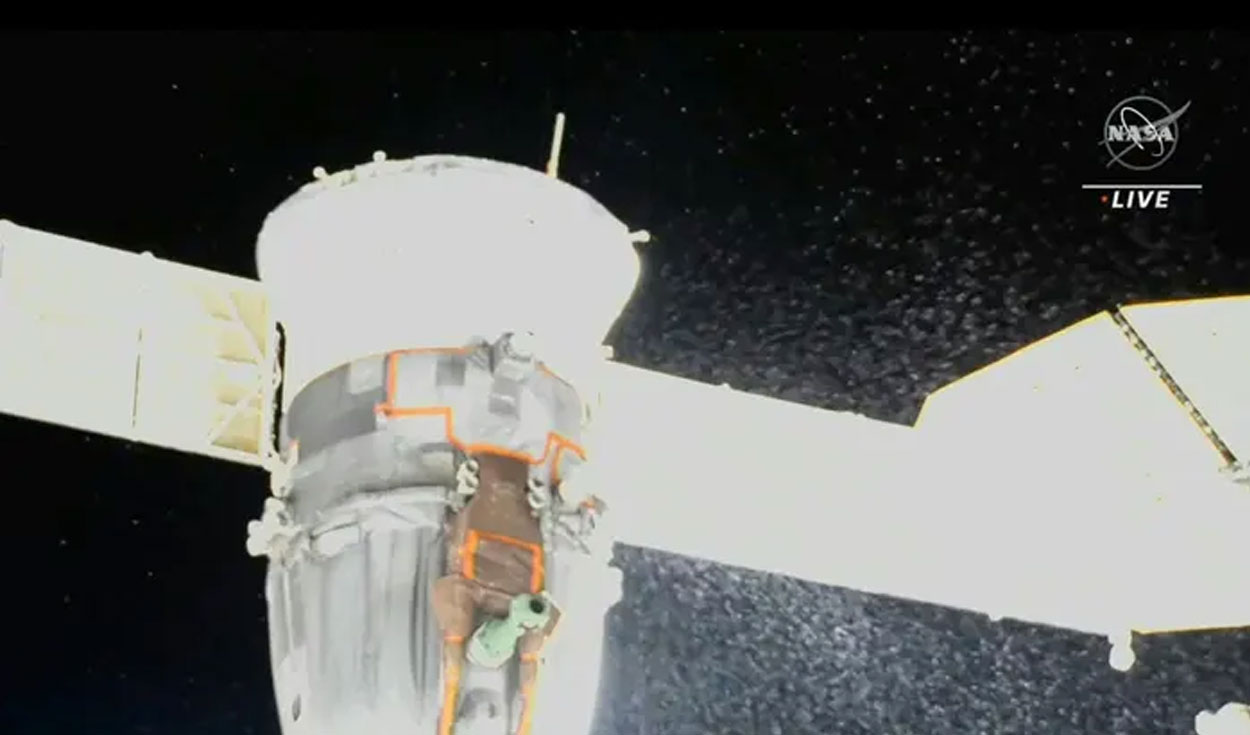 Russia plans to send a replacement Soyuz spacecraft to the International Space Station (ISS) to bring back to Earth three astronauts (two Russians and one American) who have been stranded after their capsule was damaged.

While waiting for the arrival of the replacement ship, in the event that an emergency causes the need to evacuate the ISS, Roscosmos studies various scenarios in conjunction with the particles that came out of the rear of the vehicle.

After examining the state of the apparatus, Roscosmos, the space agency of the Eurasian country, considered it preferable to send another spacecraft, Soyuz MS-23to bring to Sergei Prokopiev, Dmitry Petelin Y Frank Rubio.

The leak was detected in a live broadcast. Liquid spray is seen coming out of the stern of the Soyuz MS-22. Photo capture: NASA

The capsule “will be launched on February 20, 2023 without passengers” but with material, the Russian aeronautical institution said in a statement. The takeoff of this ship was initially scheduled for March 16 to take three other passengers to the ISS.

The return date of the three crew members, originally scheduled for March 28, was not announced, but their mission was “extended for several months,” the director of manned flights at Roscosmos, Sergei Krikaliov, said at a press conference.

Meanwhile, the damaged spacecraft will return to Earth without occupants, probably “between the middle and the end of March,” he added.

Emergency plan with NASA and SpaceX

While waiting for the arrival of the replacement ship, in the event that an emergency causes the need to evacuate the ISS, Roscomos studies various scenarios together with NASA.

However, they stressed that such a possibility remained highly unlikely. The first would be for all three crew members to return aboard the damaged Soyuz, despite concerns about the temperature that could be reached inside the craft at landing.

The second would be to reduce “the thermal load” on board the Soyuz by “reducing the crew.” One of them would then be transported by a SpaceX ship, also currently attached to the ISS.

The idea would be to secure a fifth person on board, “in the area where the cargoes are normally located,” explained Joel Montalbano, head of the ISS program at NASA.

Meteorite caused the failure of the Russian module

The leak was detected on December 14 in the Soyuz when two Russian cosmonauts were preparing to make a space exit.

An initial assessment of the causes of the coolant leak mentioned the possibility of a naturally occurring micrometeorite impact, artificial debris in orbit, or material damage.

On Wednesday, Roscomos claimed that the version of a micrometeorite impact “was experimentally proven.” According to the Russian agency, it opened a hole of “less than a millimeter in diameter” in a refrigeration tube.

Given the speed at which experts believe the object hit the ISS, it can’t be more than a “randomly directed meteor,” and not debris that “couldn’t have stayed in that orbit” at that speed, Krikalev said. ruling out any kind of mechanical problem.

The ISS is one of the few sectors in which Russia and the United States still cooperate, after the start of the Russian offensive in Ukraine on February 24 and the Western sanctions that followed.

The head of Roscosmos, Yuri Borisov, last month thanked the solidarity of the Americans on board the ISS, who “reached out to us to help”, in a context in which relations between the Kremlin and the White House are in their lowest level.

The ISS was launched in 1998, during a time of collaboration between Moscow and Washington, after the space race between the two countries during the Cold War.

For Vitali Egorov, a Russian specialist in space issues, the decisions announced on Wednesday by Roscosmos are “optimal to guarantee the safety of (the crew) and minimize the damage inflicted on the space program.”