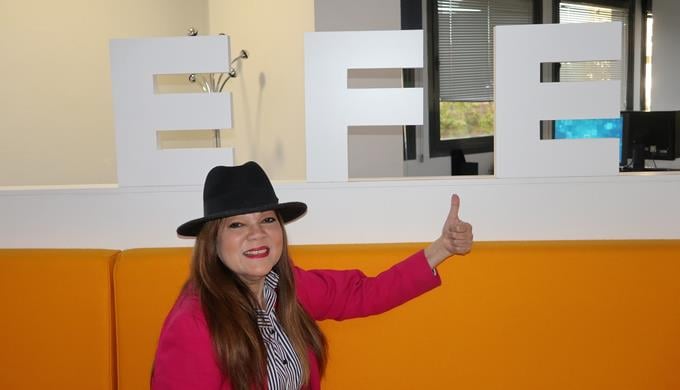 There was no other Magdalena like Angela Carrasco after the unforgettable musical opera “Jesus Christ Superstar”, which she performed in the 70s with Camilo Sesto. Both were the first Hispanic artists to sing at Madison Square Garden in New York, in Spanish.

We spoke with Ángela Carrasco in Madrid, before beginning her tour of recitals in various cities in Spain, the country where she lives, and in various American countries, including hers, the Dominican Republic.

“This album has been like overcoming the weight of the past, In other words, it has been something that is 100% mine, totally free, without constraints, or restraint ”, this artist so close to Efe tells EFE with that combination of naturalness, sensitivity and solidity that only the largest have. And it is that songs like “Now or never” or “Overcome the past” seem more like a declaration of intentions of the Dominican artist than, with a trajectory of more than 40 years of musical career.

With a voice that falls in love and the same tenderness that she wastes in person, Ángela Carrasco told us about her new job, ‘He and I’ and gave us some details of the most recent, her career after the pandemic.

With singles such as “Someone like you”, “Loving you”, “Yes, you are my man”, “I can not complain”, the singer continues to captivate new generations and now reaching more audiences thanks to new technologies .

Q- Angela, you knew how to take advantage of the time of the pandemic, what did this time of seclusion and crisis mean for you?
A- Well, that, both. I had to close my beloved music academy, and with it receive the consequent economic blow. Many singers have been trained in my academy, but I hope to have it again 100% soon. However, that helped me to work on this new album and, in the midst of this process of concentration, we discovered the Uruguayan composer Daniel Leal, who was very close to Camilo Sesto, and who has worked on several songs in this work, including the first single “He and I”.

Q- Does this new album also contain a very special jewel like “Sé de un lugar”?
A- Yes, it is a beautiful theme that is dedicated to the fatally famous Mirabal sisters, murdered on November 25, 1960 for opposing the dictatorship of Trujillo, and a symbol of the struggle for women’s rights. “I know of a place” I interpret it with a young Spanish artist, author of the lyrics.

Q- After so many years in music, do you dare to go on an international tour to put the songs from the new album before the public?
Yes, but I have never retired. I have done a lot in Mexico and for years; I worked on television shows like “Las Grande” … Well, and more recently in the contest “Your face sounds to me”, remember?

– Yes, he won it playing Antonio Machín (on the Spanish television channel Antena 3.

Q- Shortly after landing in Madrid, in 1974 he managed to enter the program “Ladies and gentlemen!” On Radio Televisión Española, which he presented together with María José Cantudo. Resounding success.
A- Yes, of course it was the only television that there was then, with the ballet “Zoom” … It was the most with the director Valerio Lazarov at the helm. There I met Camilo Sesto.

Q- The following year he got the golden opportunity with the rock-opera “Jesus Christ Superstar” and with the role of his life: María Magdalena, along with Camilo Sesto, just 23 years old.
A- That show changed my life, which still surprises today because of its strength and how well it was done. We embarked on a tour that toured all of America, including the United States, with a successful appearance at Madison Square Garden in New York. Then we went on several more tours together…. It has been a long time but that still excites those who saw it by age. It was total, and it was the mid-seventies!, Of the first powerful shows, if not the first in Spanish. Since that musical Camilo and I have worked a lot together.

Q- Was Camilo the one who also produced and composed most of the hits of your career?
A- Totally. Camilo also produced me great hits such as “My friend,” Count on me “,” Mamma “,” Love me “and the famous” Love you “, which he did especially for me.

Q- In August 1976, in full success, she had to leave the work to be the mother of her first child …

A- And I came back after three months. Oh! I left the bottles with breast milk in little bottles in the fridge, -He gets excited still remembering it-, because he couldn’t leave a contract, a show … it was sacred!

Q- You received a Latin Grammy for Musical Excellence for your artistic contributions and also the Special Casandra Award from the Dominican Republic, among others… are the awards worth the effort?
A- Every award is important…. That’s why I remembered when I gave birth, and you didn’t stop because you had a very important performance or commitment and you couldn’t leave it. Later, splicing with something else like the musical “My Fair Lady”, which was another success. In the eighties I recorded with Juan Carlos Calderón, later with Juan Gabriel….

Q- Because of the qualities of your voice, did you ever think about dedicating yourself to opera?
A- My singing teacher, Socorro Villegas, told me that it was used for opera, that it had a high voice, a light soprano, but that if I wanted to dedicate myself to it, I had to study, logically, and start from scratch. And I was no longer at that point, I had already succeeded. Opera is a very harsh world. The voice gets old a little, maybe, but if you have it educated it is better. I have always sung, since my father had a guitar academy and I have been attached to music.

Q- Your husband is also your manager and your children, are they artists?
A- Ramón is my shadow (laughs). My oldest son, Elvis, dances great but is an economist like his father; and the little one, Billy, plays percussion, drums… and is the coach of a basketball team in China. I wanted them to play the guitar like my father, but there was no way.

Q- She was very generous and very lady when she attended the presentation ceremony of that last Camilo album for which she did not count on you and on all the other famous singers.
A- Well, how to summarize… .. How not to get angry when he came out presenting “the album of my life!”, With great fanfare and calls all the singers, young people and he doesn’t call me! – And what happened? – He told me not to be stupid …, “… but Angelita, if you are always there!”

Q- How do you feel now with this new job?
Well, look, I’ve almost always been next to, next to, or depending on something. This record is all mine. Now it’s 100% me. I’m happy, I feel like when your mom lets you walk alone, and finally lets you go! Well, as one of my songs says, I have conquered the past!