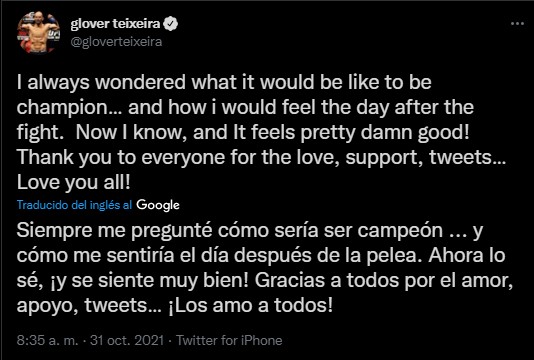 Without a doubt, the great surprise of UFC 267 was given by Glover Teixeira, who at 42 was crowned for the first time as world champion of the company after making the Pole perform. Jan Blachowicz.

The Brazilian warrior knew that his fight this past Saturday in Abu Dhabi It was the last chance he had to fulfill his dream of seizing the title of the UFC. Therefore, after emerging victorious from his fight, the veteran fighter moved more than one with his statements.

However, yesterday a post he made went viral. Glover texeira on Twitter. The brand new champion of the light heavyweight division of the UFC made a surprising revelation that generated all kinds of reaction among his followers.

“I always wondered what it would be like to be a champion … and how would I feel the day after the fight. Now I know, and it feels great! Thank you all for the love, tweets … I love you all!” the aforementioned social network.

After winning the light heavyweight belt, the new champion of the UFC assured that he still has a lot to give and that he is ready for any challenger, so he did not hesitate to call Jiri prochazka, who was in the audience, for an upcoming title match in 2022.